Carol Mavor’s Blue Mythologies: Reflections on a Colour, opens, after Contents and Dedication, with the author’s own picture of Canal Water near the Fortuny Museum in Venice.1 Throughout the book, Mavor’s blue is woven from threads that connect Proust’s In Search of Lost Time, the vibrancy of cyanotype, the palpitation of a cold body stretched out, the indigo milk of a mushroom, the sea, the sky, Roland Barthes’ Mythologies, Piero della Francesca’s cloaking of the Virgin in lapis lazuli, the violent history of extraction and enslavement, the distance and melancholy of Derek Jarman monochrome film and Krzysztof Kiéslowski’s punctuated flickers of lollipop wrappers, pencil scribbles and suspended glass crystals with many more readings, distant and close, of a colour that’s more than a colour. Blue is (in) religion, painting, literature, love, death, film and so on. The author’s first writing on blue, however, is a photograph she took of water that appears not very blue.2 And yet, it is the kind of blue – beyond mere colour – that Mavor pursues for the remainder of the book.

The writing of art history through photography is of course nothing new and has come to shape the contemporary understandings of the discipline. In Donald Preziosi’s account, “art history as we know it today is the child of photography”.3 The affordances of photographic technology for “analytic study, taxonomic ordering, and the creation of historical and genealogical narratives”4 function to see artworks in detail, abstraction and relation. Photography has the function of a tool for Preziosi. After all, the subtitle of his book frames art history as a “science”, however “coy” it may be.5 Yet, in Mavor’s use of the opening image, and subsequent others, we also see photography’s power not to be contained, not to speak as a limitable tool of a scholarly enquiry, but to remain at once legible in some respects and beyond certainty in others. Preziosi’s “coy science” does not produce a single, unified, homogeneous discipline, neither does it, though, point towards the photographic image’s capacity to co-write the undisciplined nature of art-historical practice. 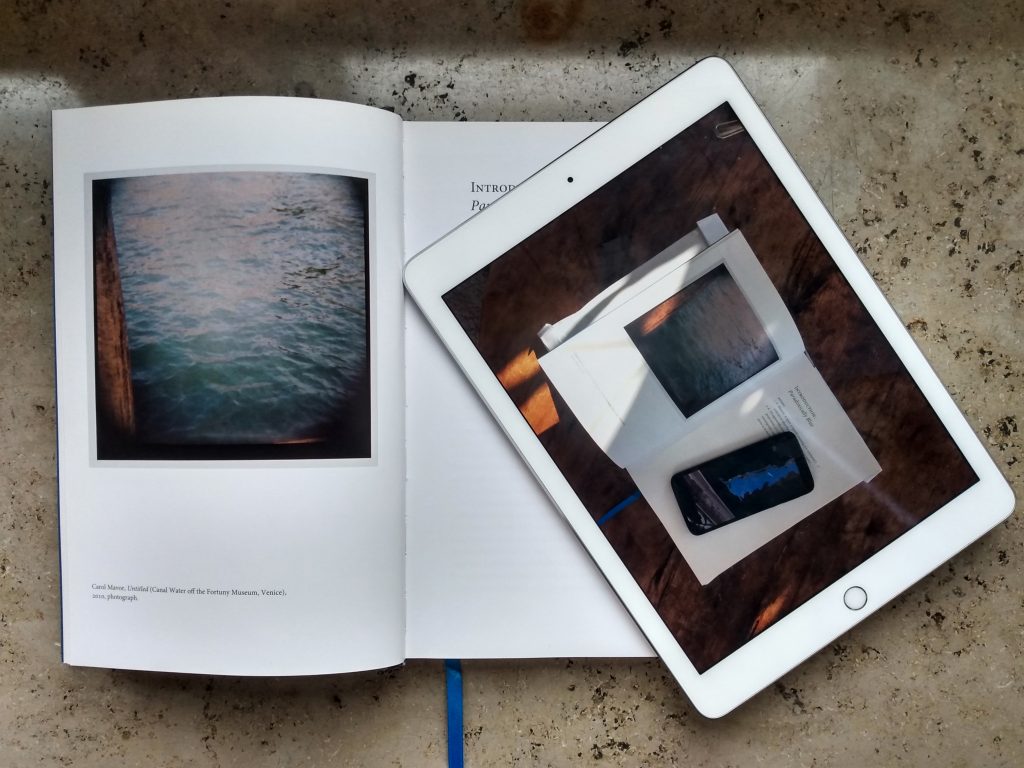 The first time I opened Mavor’s book my plane banked left on the descent to Edinburgh airport, allowing for a view of Wardie Bay with its pincers of Granton Harbours’ breakwaters reaching into a sea marbled by sunlight. At the time, I imagined I could see the blue of Mavor’s first writing in the blue beneath me. I diligently made a note on the paper cover, in which I’d wrapped Mavor’s book, to recount the occurrence in professional settings. A number of deceptions surely played out though. Not only is the opening of a new book on the descent towards an airport the potential admission of the procrastination that has come before, but the recognition of the Firth in the canal and the canal in the Firth meanders between stating the bleeding obvious – that bodies of water often appear in shades of blue – and a faux-perceptive gesture that attests to blue relations in order to seek atonement for airtime wasted. Blue is timely and contingent.

If photography is conventionally linked to art-historical enquiry through ideas of shedding subjectivity to achieve greater objectivity – a binarism that already betrays a particular ideological understanding of scholarship – Mavor’s image casts this simplistic understanding into doubt. Art history interprets images of varying kinds, whether photographs, paintings, drawings, prints, films, stills and so on, because they are powerful. However, that understanding of images usually does not include those incorporated into the writing of art history itself. Here, figures have illustrational functions. As reproductions, not producers, they are meant to support something made apparent in words. Similarly, scholarship often seeks to be highly attuned to the material constituents of its ‘objects’ but is less so of its own production. Yet inevitably, art history creates its own artefacts, whether digital or analogue. These artefacts are in themselves interpretable, otherwise historiography as a discipline would not exist. The histories, conventions and enactments of scholarly practices thus become the investigative ground for future scholarship. There’s no need to wait for the future, though. The artefacts of scholarship are open to interpretation now. Or differently, writing – now – with or without pictures produces no self-contained object of lucidity and transparency but an opaque artefact whose interpretability has always already begun. At times, these moments of interpretation are planted, flashy moments of reference and allusion. Though often, they may exceed the author or contain the bewilderment they sought to uphold. 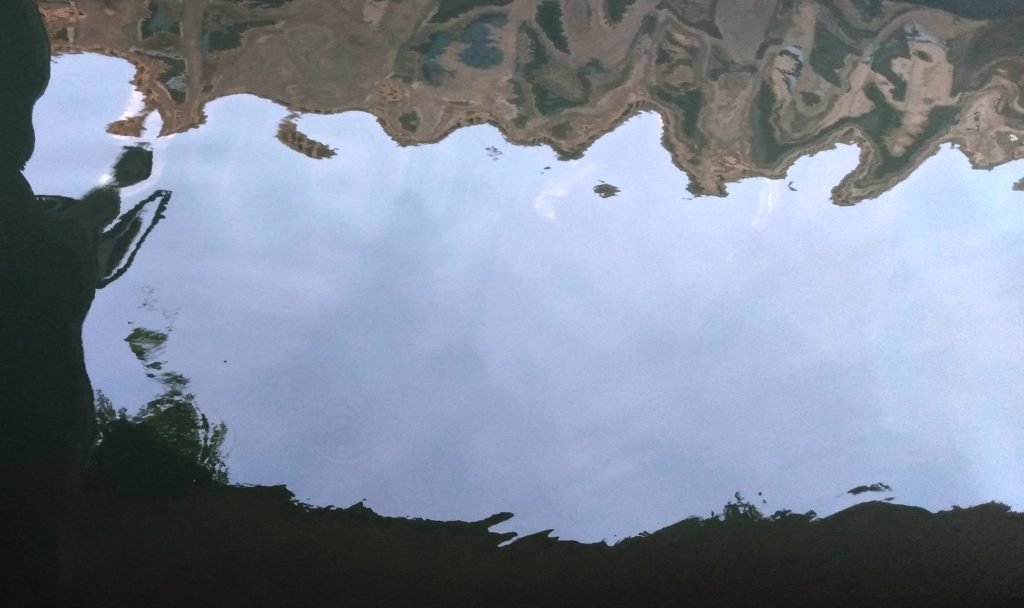 Retracing the flight path via YouTube years later, this time seated at a desk and viewing a PDF of the first few pages of Mavor’s book, revives neither the blue I had remembered, nor any necessary connection I had urged myself to see between the estuary waters of the Forth and that Venetian canal. Most compelling in the digital review of Mavor’s pre-introduction photograph is the anodyne sexiness of the multiply remediated soft reflections of the sun on top of the dancing water. First the light plays between sun, wave and eye, recasting and casting anew sky, brick and Istrian stone, then is frozen in a Polaroid, reproduced in print. Now it projects through the surface of a device that at a pinch allows to magnify every dapple in a test of screen resolution, scan quality, dots-per-inch print and photochemical translation of the instant film’s negative capture and reagent transfer to positive image. An endless deferral ensues. In an attempt to view the image once again – review it perhaps for what it is, for what memory has made of it over time and for its relation to Mavor’s meditations – it retreats in its multiple reproducibility that not merely reproduces but is its own material image anew in each iteration. Mavor had written about Venice as “a blue Fortuny dress of 117 folded islands” and the couturier’s dresses as having “shimmering folds” that “reflected the city of water”.6 Mavor’s blue finds itself in reflection, recursion, multiplicity, the paradoxical and the oblique.

Ralph Lieberman has questioned the use of optimally lit, full-frontal, middle-centred photography in art history.7 Instead, he proposes that the demi-lit, sideways glance might actually approach the viewer’s experience of, for example, a sculpture in situ in a gloomy medieval church more representatively. While this proposition aims to account for a potentially more realistic viewing experience, rather than the art-as-crime-scene illumination of scientific objectivity, it also fundamentally maintains the evidential function of the picture. Evidence, of course, may be submitted to establish doubt, though here it still maintains that it stands in for another experience witnessed elsewhere. Mavor’s use, on the other hand, does not seek to prescribe how the figure works in relation to the text. There’s a palpable and vital connection, and her perception of Venice and its canals is explored in the text, but the gap between observation, description, picturing and reality is upheld, because it cannot be closed anyway. Hayden White compared the urge of the historian to provide an impossibly complete picture to the work of the annalist. Where the latter leaves a blank, the historian’s “narrative strains for the effect of having filled in all the gaps, of having put an image of continuity, coherency, and meaning in place of the fantasies of emptiness, need, and frustrated desire that inhabit our nightmares about the destructive power of time.”8 White’s writing of history is essentially provisional, to be revised, furthered and amended. Scholarship emplots the past in history in the way that fiction uses language.9 That’s not to say that the past is fiction, but that scholarly writing possesses only the same tools that fiction has available. For White, historical narrative is metaphor; it selects one thing, in order to constitute the particular reading of another. The narration does not create the image of the past but provides the basis on which to create those images. Mavor’s picture and her writing point towards the emplotment of blue in the text itself. The image of the Canal Water off the Fortuny Museum is reproduced on the verso of the Dedication page which begins ‘For Hayden White’.10 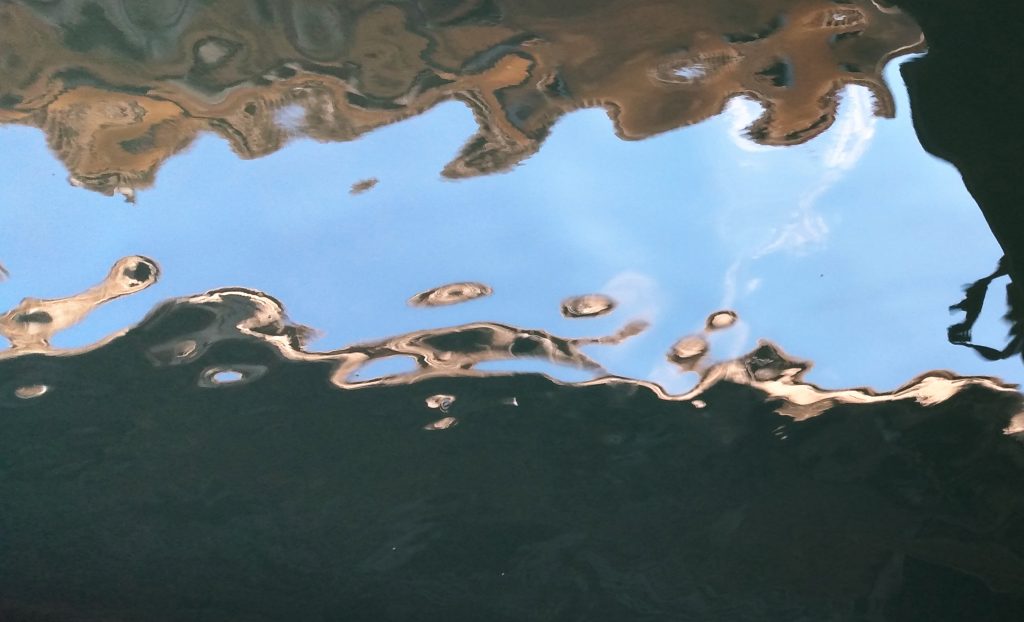 Google Maps only offers an own-brand Firth of Forth whose contours denote the right place, but whose coastal green-blue merges in jagged pixels with the generic ‘water is blue’ of a child’s drawing, albeit in the billion-dollar hand of unnamed tech bros. Its Rio de Cà Michiel in Venice may as well be a narrow road, which in some ways it is. I arrived in Venice with a digital copy of Mavor’s image, not with the purpose of a pursuit, neither Henry B., nor Tadzio, but with the anticipation that I would also visit a spot of blue near the Fortuny in order to find a different one. Blue is not this. Blue is not that. Rather, blue moves askance. Blue is a seeing through.