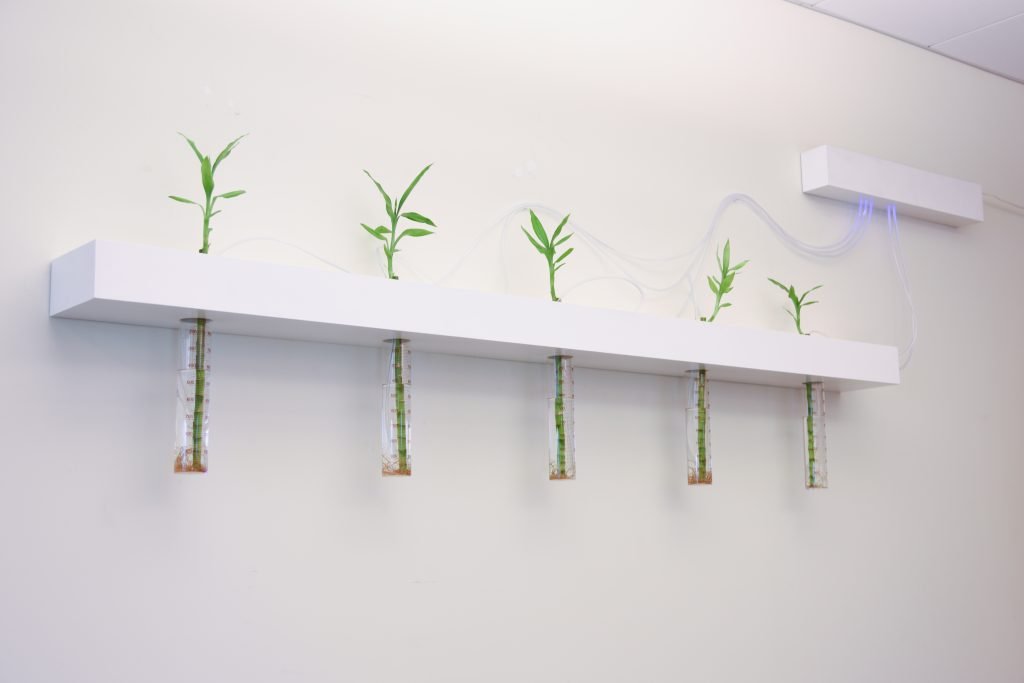 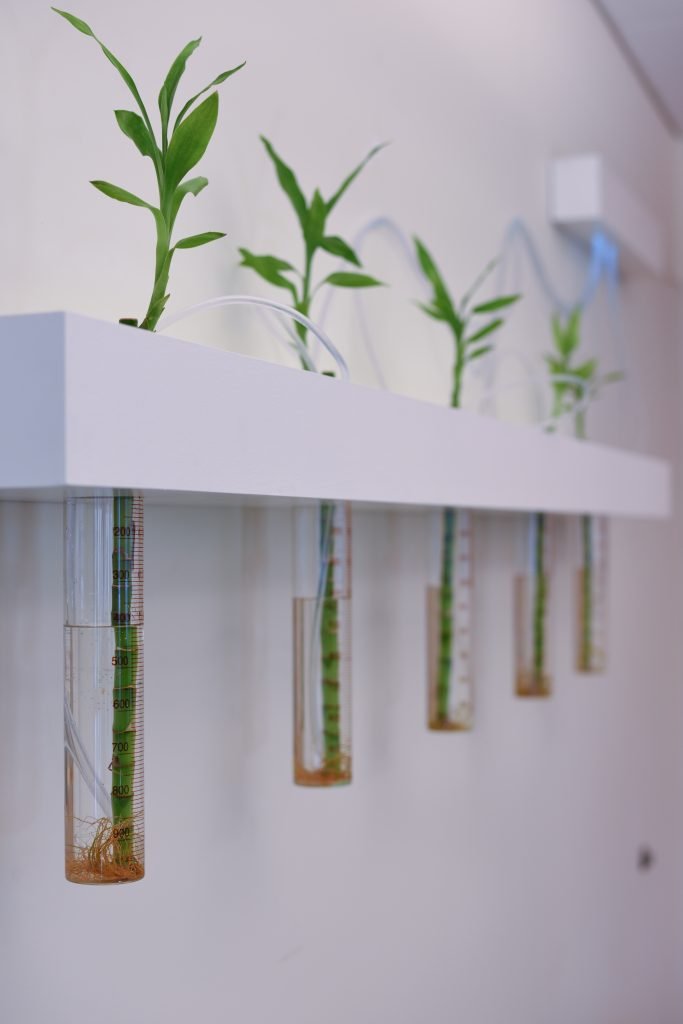 || Roots || At the bottom of each test tube, an entangled nest of bamboo roots drinks color and light from fiber optic cables. Both old roots and new cables perforate our ground, in competition or coexistence? || Wings || New leaves ambitiously push through a thick, white barrier that supports their growth only in that one direction – upwards, evoking an organic optimism. Undulating cables form the clouds they are reaching for. || Photosynthesis || Individual and isolated, yet interconnected through digital channels, the living, breathing organisms are all nourished by the same source of information. Knowledge has become something that is transmitted by light pulses. Former thickets of bamboos are on their own now. || Cityscape || In sleek glass towers, between white walls, tender life is winding its way up, contrasting starkly with the sterile architecture of its habitat. The bamboos refuse to be sculpted as they are contained in an urban-looking silhouette. || Life Support || One can almost hear the faint beeping of machines in the background as the plants are sustained by digital feeding tubes, swallowing all information that they are fed but do not seek. What they receive and process is beyond their control. Every flicker of information touches the core of their roots. || Digital Humanity || The maximized contrast of analog and digital, organic and man-made, natural and cultural, free and constrained, is what produces the irresistible tensions of this piece. Where, how and why do we shelter that which wants to grow?

The affective response to architecture and/as art has drawn significant attention in this millennium. Walls, structures, boundaries, shadows, light – all that which constitutes a lived-in space has a powerful effect on its inhabitants. Tensions between artistic visions and functionality, such as have been critically observed about Iraqi architect Zaha Hadid’s acclaimed architectural designs,2 invite reflection on the interplay between the two. In his book The Art-Architecture Complex (2011), Hal Foster traces an aesthetic line of thought from the stark abstraction of Ukrainian modernist painter Kasimir Malevich to avant-garde architecture of the 20th century and, ultimately, to Hadid’s imaginative takes on architectural geometry. In an interview with Newsweek that same year, Hadid stated: “I don’t think that architecture is only about shelter (…). It should be able to excite you, to calm you, to make you think”. The sheltering aspects of the installations by Greek artist Zenovia Toloudi certainly seem to evoke the affective responses which Hadid expressed above. Toloudi, born and raised in Greece, situates her art practice both in Europe, especially the Mediterranean, as well as North America, where she continued training in architecture as well as design art. She is currently a professor of studio art at Dartmouth College in New England. Like all inspirational work, her installations invite a multitude of possible readings pertaining to notions of living space and space-that-lives. They often create, structure and reimagine the very spaces in which the viewers interact with them.

The 2016 Photodotes VI: SYNC is ON (image above) is part of a larger series that illuminates the fraught relation between humans and a presence/absence of natural and artificial light in modern environments. The vertical growth of metropolitan skylines is emulated by organic life forms that try to inhabit, maybe even thrive, in it. Analog and digital interplay can no longer be disentangled or clearly disambiguated. Photodotes V, a live experiment, presented a “cyborg hanging garden” in Boston where the human visitors’ movement altered the artificial light spectrum, which in turn nurtured the plants in an otherwise lightless environment – highlighting the relationality and interdependence between all that shared the space. Hal Foster observes that “[a]lthough many artists and architects privilege phenomenological experience, they often offer the near-reverse: “experience” handed back to us as “atmosphere” or “affect”—that is, as environments that confuse the actual with the virtual, or feelings that are hardly our own yet interpellate us nonetheless.”2 If Photodotes VI indeed represents and criticizes that very confusion of actual and virtual spaces, then Photodotes V, I argue, exemplifies the phenomenological aspect of art and space: Even a temporary visitor to the installation cannot escape the material reality of inhabiting the shared space, cannot shirk the responsibility of altering or providing energy. Of course this type of affective demand by art can be anxiety-inducing. We think of how Anthony Vidler diagnoses the modern subject in his book Warped Space. Art, Architecture and Anxiety in Modern Culture as: “…caught in spatial systems beyond its control and attempting to make representational and architectural sense of its predicament”3. Vidler goes on to examine strong affective responses such as “fear, anxiety, estrangement, and their psychological counterparts, anxiety neuroses and phobias” and their connection to spatial awareness and aesthetics.4 Photodotes V, as well as its siblings in the series, each emphasize the importance of responsible engagement with the space humans and non-humans are somewhat forced to co-occupy. What are some of the implications, then, for the cultural practice of architecture – especially in the current global situation of ever-increasing urban populations and the spatial demands this entails? While scholars such as Alan Read have been investigating appropriate theoretical paradigms to accommodate this scenario,5 Toloudi’s art provides part of an answer in a different voice.

An earlier work by Toloudi titled Aquatic Metapolis, shown as part of the 10th Biennale in Venice 2006, evokes a very different type of dwelling space: While it envisions a new, concrete urban space, an aquatic city in the Aegean archipelago, it simultaneously allows an association with the mythical urbanity of Atlantis, submerged in the ocean and described by Plato as an antagonistic, almost dystopian contrast to his early notions of state and government. If we do indulge this association and envision this kind of metapolis as a meta-city whose structures exist in a normally unlivable environment, then it, too, shows us the limitations of our own aspirational habitats: perhaps not even imaginary spaces are safe from (punitive?) environmental collapse; perhaps fictional urban spaces are as dependent on their inhabitant’s actions as the non-fictional ones many of us currently seek shelter in. Shelter can also be provided by Toloudi’s Blanket III, a large, foldable, jointed metal canopy that seems to want to envelop the viewers who approach it. The cozy promise of the title is somewhat jarred by the cold metal surfaces and triangulated edges, but it can function as an artificial ceiling that temporarily structures a meeting space. In some sense, this metal blanket, despite the rigidity of the material, provides more flexibility than some of the organic plant matter or digital impulses seen in the works mentioned above. It demonstrates adaptability to and inclusivity of changing external circumstances. It may be an unexpected kind of refuge that one finds under the looming geometrical puzzle, but a refuge nonetheless.

If Hadid was ahead of her time with her demand for artistic exuberance in architecture, and if, complementary to this, Foster and his interlocutors are correct in their assessment of the “critical role of architecture in the recent repositioning of the arts”6, then Toloudi’s art practice manifests a symbiotic interplay between the two non-opposites. In other words, if we ask ourselves how to dwell in this increasingly hectic and hostile world, part of the answer emerging from this art seems to be: by sheltering each other.